Jeremy wrote in with a childhood recollection of water rationing in California in response to yesterday’s post:

I remember water rationing when I was a kid in San Diego. We didn’t ration but in SF you did. Once I asked for a glass of water in a Chinese restaurant. I was like 7 or 8. The waiter brought it to me and she said: you better drink the whole glass because someone in SF didn’t take a shower so that you could have it!

Another drought cycle, perhaps less acute but more widespread, brought mandatory water rationing to Ventura and Santa Barbara Counties (and other parts of California) when I was in 6th and 7th grade. The water company jacked rates to encourage conservation, on-and-off showering was the norm and front lawns everywhere were left to go brown, with the threat of “water fines” for those caught with the sprinkler on. My mother became adept at reading our water meter, and I was obsessed with creating a garden filled with cactus and rocks. Around this time, too, I started frequenting Joshua Tree out in the Mojave Desert. Apart from the temperate areas along the coast, this is arguably the real California. Of course, most of the state’s population is concentrated in the desert areas. Although reclaimed desert is probably more accurate. 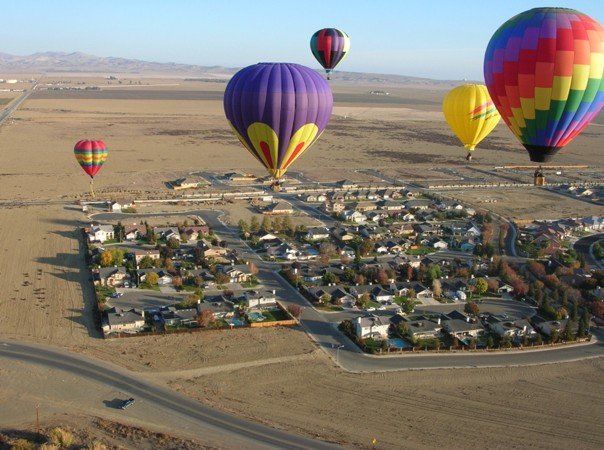 I’m still baffled by desert tract homes with their green lawns. Those seen above are in Coalinga, a town located in California’s heavily irrigated Central Valley. Swimming pools, lawns, all manner of trees. As if those fences and roads can deny the reality so plainly visible.

Don’t even get me started on golf courses.

Unfortunately, it looks like the recollections of Jeremy’s and my childhoods will again become reality in California. Today’s San Francisco Chronicle ran a front page article outlining the situation. The meat of it:

The rainfall expected in the region through Monday will be too little, too late to turn around a month that usually delivers about 20 percent of the rain and snow needed for the year, officials added.

With no blockbuster storms on the immediate horizon and forecasters predicting a longer-term dry spell, water managers around California are busy calculating just how far they can stretch supplies already drained by two previous dry winters.

So far, two dozen California water districts have extended rationing imposed last year – and more and steeper cuts likely are on the way.

“These are going to be hard times for everybody,” said Tim Quinn, executive director of the Association of California Water Agencies, which represents 450 public water agencies around the state.

For the season so far, precipitation totals around the Bay Area are 40 to 60 percent of normal, according to experts. While that doesn’t sound catastrophic, it’s not enough water to top off critically low reservoirs or soak parched farmland.

Ask anyone in California about the first few weeks of January and you’re likely to hear about the weather. While the east coast freezes and the Pacific northwest floods, California has been experiencing unusually warm and dry weather. In fact, driving through the Salinas Valley last weekend, I noticed that the outside temperature was pushing 80. On January 18th.

We’re now in the third year of a nasty drought and up until yesterday, we haven’t had any rain to speak of in January. And just last week, Sonoma County officials announced that should present trends continue, they will call for mandatory water rationing. Other counties and/or the state would be likely to follow that lead.

From the Santa Rosa Press Democrat:

Lake Mendocino, northeast of Ukiah, is at its lowest level for this date in 20 years. Storage at Lake Sonoma, northwest of Healdsburg, also is far below normal.

The San Francisco Chronicle has an informative and continuously updated page for Bay Area and statewide rainfall levels. We’re off by anywhere from 50 – 60% in Northern California; it gets much worse as you head south. Yikes.