(Above: the entrance to Ex-Forte Prenestino, the Roman centro sociale that regularly hosts Critical Wine in Italy’s capital city)

The city of Verona buzzes with activity during the annual VinItaly fair (April 3-7), and besides the big fair itself, there’s any number of off-campus events happening at all hours every day. In a post from last year, Terry Hughes over at Mondosapore discusses the explosion of tangential events around VinItaly, likening the din and excitement to the fantastic Edinburgh Fringe Festival. An apt comparison if you ask me, where literally the fringe elements themselves are a big draw for the crowds.

One of the first parallel events during VinItaly was Critical Wine, a loose left-wing collective of artists, anarchists and enogastronomes (among others). I’ve written about Critical Wine in Wine & Spirits and on this blog, and the event has also turned up elsewhere in the wine blogosphere (here and here).

Unfortunately this year’s Critical Wine–at least the Verona manifestation of it–is canceled. According to an email I received from a member of Verona’s La Chimica centro sociale, the original host site for the event, Critical Wine won’t be happening next week because the city authorities closed down La Chimica and the Critical Wine folks have not been able to find an alternative venue. I’m sure there’s more of a story here: the language my contact used in his email was harsh (“La chimica è stata sgomberata e rasa al suolo dal nuovo sindaco leghista/fascista“), essentially labeling the mayor of Verona a fascist. But then that is in keeping with ideology of Critical Wine, a movement born out of the fiery passions of the Italian anarchist left.

One can’t help but wonder if the group has hit a major snag: in addition to the cancellation of the Verona event, Critical Wine’s website is at present shut down. Communication problems, it seems, plague the group more so than regional authorities.

Perhaps the diffusion of events during VinItaly–many of which espouse some of the founding principles of Critical Wine like minimalist winemaking, organic farming, etc.–has indeed caught up with itself? 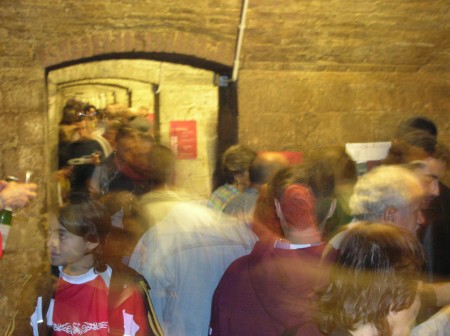 Gruppo Vini Veri, a loose organization of Italian wine producers who are part of the growing natural wine movement, have announced the dates of their 5th annual tasting, April 3-5, 2008. As usual, it’s staged during the VinItaly trade fair in Verona; however, the Vini Veri producers very much consider their event–and movement–to be an alternative the bigger, busier show that is VinItaly. They are an interesting group of winemakers–not all are organic, nor even Biodynamic–but they are keen to respect the traditions of their zones and maintain a character in their wines that is unique and expressive. Eschewing international varieties in favor of indigenous grapes, working with the yeasts native to their vineyards and wineries, and a commitment to a minimal use of sulphur are among the tenets of their Vini Veri manifesto (every Italian organization needs a manifesto).

VinItaly itself is worth going to, but you can bet I’ll attend the Vini Veri tasting–and probably Critical Wine, too. There’s a lot to do in Verona come April…

For a complete list of participating producers, along with individual producer profiles, go here (Italian only).