Richie Nakano, a.k.a. linecook415, hosted a test run of his months’ long quest to perfect his ramen the other night.

(Above: ramen noodles made from scratch go into the 5-day stock made from organic pork bones. An earlier version of the stock was made with the bones roasted first; Richie felt that stock ended up to sweet and fatty, so this effort skipped the roasting and resulted in a silky, flavorful blast of savory pork and umami flavors.)

Earlier in the day I met up with Jon Bonné, a fellow ramen enthusiast who like me, is a saddened by the lack of ramen options in San Francisco, unlike Los Angeles or New York. Beyond Katana-Ya, there’s just not much.

Our particular challenge this day was, as you probably guessed, to find a few wines to match with ramen. (We wanted to look beyond the traditional beer, maybe saké, pairings.)

Ramen, such as it is, can be difficult to pair because it’s made up of so many different elements: there’s the stock, noodles, sliced pork, egg, usually some sort of green, spices, etc. Hence why beer is an easy choice. But why choose the easy way? When matching wine and ramen, one way to do it is to try to work with various flavor combinations. However, we thought the way to go was to work with texture, since in many ways that’s what good ramen is all about: the balance of the diverse ingredients comes together to create the texture of the dish. So in theory at least, looking at that overarching theme might lead to a good match.

The results? Sherry rocks, and is a good choice. But lighter styles like Fino might not hold up so we opted for dry, rich Amontillado from El Maestro Sierra, as well as a few other selections. The El Maestro was the most successful, at least according to my palate.

Another option: Jacques Puffeney’s Cuvee Sacha, a blend of savagnin and chardonnay with a slight oxidative character that matched the umami flavor in the stock, and also hugged the texture of the combined egg yolk and noodle. We tried a few red wines but they didn’t quite work for me. Although an orange wine might do the trick… 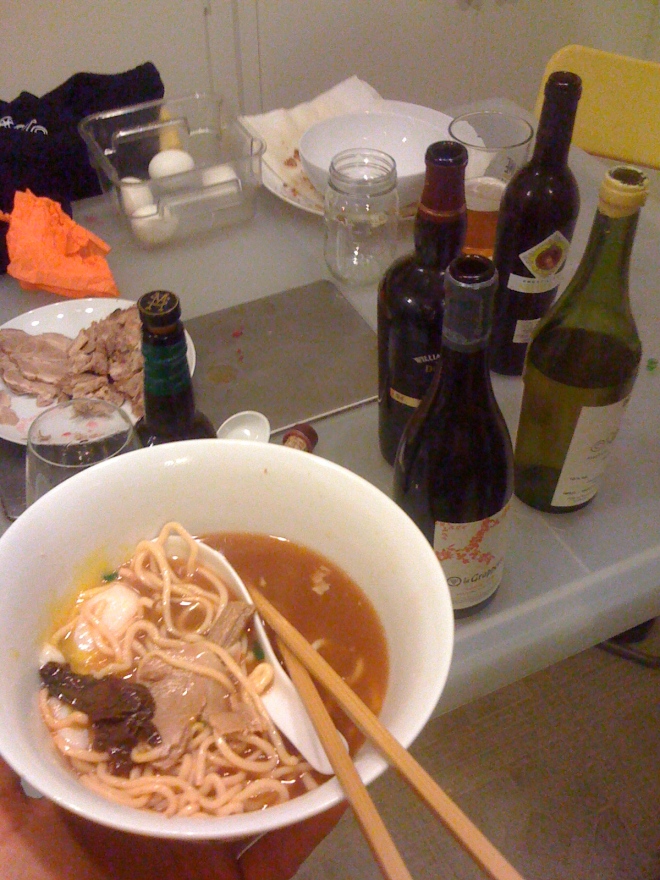 (Above: my half-eaten bowl of ramen on the matching table.)

Oh, back to the beer for a moment. Jesse at Beer and Nosh brought along a number of delicious ales, including his home-brewed gueuze style beer, made with a brettanomyces yeast that he bought from a home-brew shop in SF. Jesse related that when a famous California winemaker heard about his purchase of a brett strain for the beer, he excalimed: “you can buy brett?!?”

Jess also has far better pictures of ramen night than I do. View them here.

You can read more about Richie’s ramen plans here, and then there’s a good New York Times story on ramen hunting in Tokyo to read here.

I’ve finally got a decent camera in my phone. Not that I’m abandoning my Nikon or anything, but this does mean more spontaneous pics to share. To wit:

Check out those tartrates!

Is it me, or is that a fingernail floating in the neck of this wine? The label *did* say that this wine was bottled unfiltered. Maybe that means the grapes were trod by foot, in which case, well, I’ll let you speculate about that…

Ever wonder what’s in a wino’s recycling bin?

I’m busy working on an article for the San Francisco Chronicle and therefore can’t think of anything original to say today. However some friends of mine certainly have done so, and I’m happy to spread the love. Here’s what they’ve got to say:

Peter Liem, my friend and colleague from Wine & Spirits who’s currently living in Champagne, has posted about the different vine training systems used for the three grapes of the region, pinot noir, pinot meunier and chardonnay. Three informative and well-written posts, complete with illustrative photos (including the one below, which I think makes the chardonnay vines look terrifying, like skeletal hands digging out of the earth. Or maybe even the fossilized remains of that face-sucking thing from Alien).

And then over at the 7×7 drinks’ blog, my friend Jordan Mckay posted the following video of a beer dispenser in the Tokyo airport. Check it out–it even adds a creamy head!

It’s late night and I’m feeling sated after some delicious homemade potato leek soup washed down with Czechvar (a.k.a. Budweiser Budvar, for you Czech beer lovers). So rather than stare any longer at this computer screen (check it, blogroll updated down there to the right–all great blogs to read!), I’m going to pick up my book and read before bed.

Oh, one piece of news to share: if you like haven’t named your price and downloaded Radiohead’s latest album, In Rainbows, already, December 10 is the last day to officially do so. Go here to start the download (inrainbows.com). After that you either have to wait for the physical version to come out on January 1 or head over to your favorite file-sharing service. If you like Radiohead, that is.

Swamped on production deadlines for W&S tomorrow but I hope to post about my tasting group’s session on Saturday with 2003 Austrian Riesling. So, until then.