Time to take a break from all that Italian wine here at Spume. One of the more notable wines this week comes from Steve Edmunds at Edmunds St. John.

This feisty blend of syrah and grenache feels spicy and lean — more about savory flavors than sweet fruit, though there’s enough California power to give it an appropriate New World charge. Edmunds co-ferments the grapes for this wine from three vineyards, Wylie and Fenaughty (both in El Dorado County, Sierra Foothills), and Eaglepoint Ranch up in Mendocino. I was surprised by the wine’s finesse and texture, which was silky without being overly generous or stupid. Edmunds’ response to my question/statement about the relationship between co-fermentation and texture:

Not just texture, but harmony, and integration. It’s amazing, after pressing into cask, I didn’t rack until August of the year after harvest, and bottled right after the rack. Glad you liked it! The nose, I think, is pretty persuasive…

“Persuasive” is an excellent word for it. A lovely effort, worth tracking down (I found my bottle at Castro Village Wines in San Francisco, where it was about $21). You can learn more about That Old Black Magic here.

I found myself in Sonoma County last week where I finally got to see one of the so-called ‘egg fermenters’ firsthand. Cast from concrete and inspired by the clay anfora vessels used in ancient winemaking practices (and most famously these days by Josko Gravner), the purpose of the egg is to maintain a steady temperature during fermentation. Concrete is also slightly permeable, so unlike, say, stainless steel, it allows for subtle interaction with oxygen. They also just look cool.

The fermenters below were made by Nomblot, a company located not far from Beaune. For readers of French, here are some tech specs. It seems the folks at Nomblot employ the golden ratio to design their egg. Nifty! 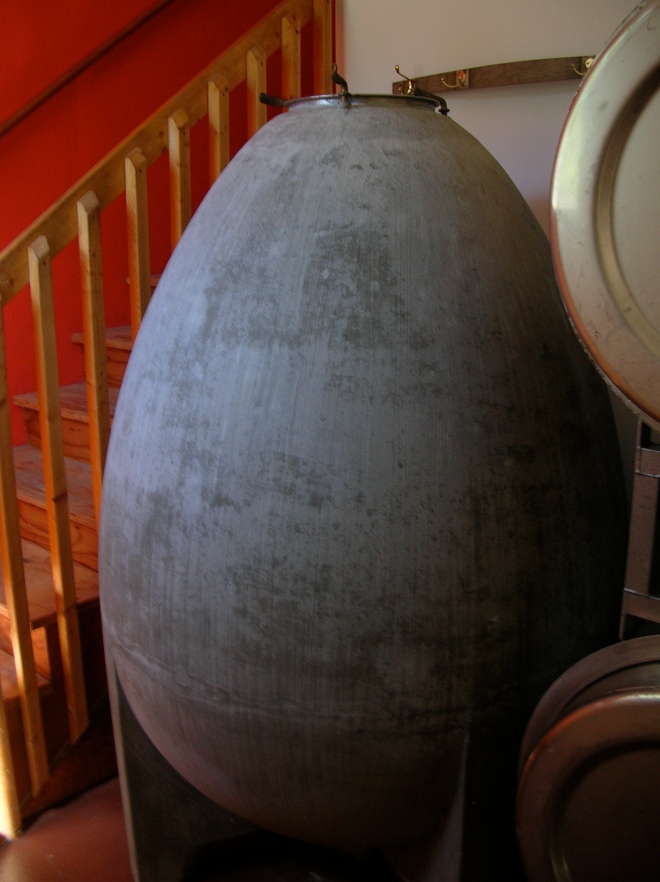 I kind of expected Robin Williams to pop out of the top in an orange jumpsuit. Didn’t happen. 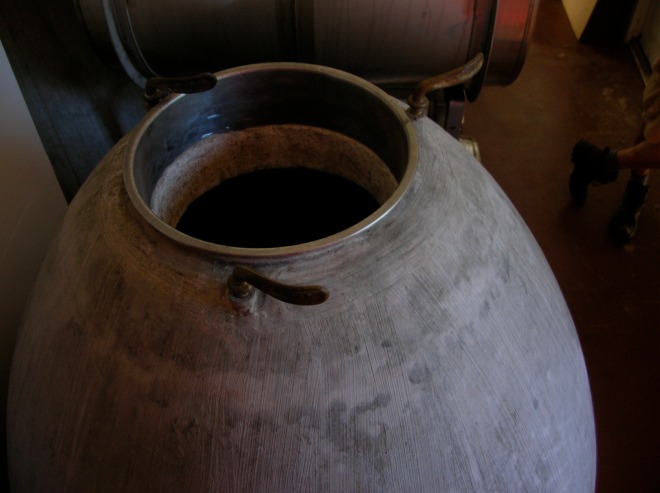 I have a post up at Wine & Spirits that talks about the Natural Process Alliance, a new project from Kevin Kelley of Salinia Wine Company. Kelley has made a skin-fermented chardonnay and a pinot gris relying only on indigenous yeasts and without using any added sulfur dioxide. The wines are delicious although quite limited in production. Also cool: They challenge the rules of packaging and are shipped in reusable stainless steel canisters.

(If you’re in San Francisco however, you can get the pinot gris now at NOPA where it’s $8 a glass – yum).

Anyway, to learn more about the Natural Process Alliance, head over to Wine & Spirits.

*Alice Feiring has an account of her visit with Kelley when this wine was in its infancy.
*For more about the usage of sulfur dioxide in contemporary California winemaking, check out this article I wrote last year for the San Francisco Chronicle.

But especially for dessert…

This was the lesson from dinner the other night when we made swift use of some new kitchen toys (birthday presents: all the tools necessary to make western and central European style dumplings, be they ravioli, gnocchi, maultaschen or spätzle). After a hefty stick-to-your-gut feast of potato gnocchi with a wild mushroom ragù, washed down with plenty of Barolo, I grabbed a bottle of Champagne from the fridge (a rare thing; champers doesn’t last long in this house). Anyway, another birthday present: the Zéro Dosage from Ayala.

Lean and refreshing, with lasting flavors of pear, this was yummy stuff. I’d write a longer tasting note, but by the time we got to this wine, well, let’s just say the ol’ cognitive powers of recall were slightly blurred.

Zéro Dosage is one of the terms used in the bubblesphere to denote a sparkling wine made without the addition of a sweetner (whether sugar or grape must) following disgorgement. It can yield some incredibly interesting wines, more of which seem to be appearing in the American market. The practice isn’t just limited to Champagne of course, and can be found in Spanish Cava as well as sparkling wines from places like Slovenia (Movia’s beguiling PURO isn’t even disgorged, so there’s no need for dosage). Anyway, you can read more about no-dosage Champage here and here.

*In other news, I’ve picked up a new and dangerous habit: vinyl records! Got a cool little turntable for Christmas and I’ve been playing with it nonstop. One of the coolest things about it (aside from the Kraftwerk record spinning at the moment) is that it has a USB hookup that I can run straight into my computer to record uncompressed digital audio files. Score!

And with that, the compact disc, at least in this household, finally ceases to have any relevance…

Here’s the video for Blonde Redhead’s 23, taken from the LP of the same name. It sounds mighty fine on vinyl.

Five years ago I worked the vintage in the mountains above St. Helena in the Napa Valley. At the time I started something resembling a blog, which in the end was updated oh, I don’t know, about three times, maybe four. To all you winemakers and cellar rats with blogs, I don’t know how you keep up with it, but I’m impressed. After a long day on the crushpad and in the winery, the *last* thing I felt like doing was looking at a computer screen. A cold beer and hanging out on the porch was about all I could muster.

If you’d like to read a couple of informative winemaker/proprietor blogs with substantial harvest sections, then I can recommend the Tablas Creek blog, by Jason Haas, and the Montalcino Report, by Alessandro Bindocci of Tenuta Il Poggione. Where they get the time, I don’t know, but both blogs are worth checking out if you’re in need of a harvest fix.

I did manage a few entries back in 2003, and for some reason I felt like sharing the one below–a little vignette from the end of a frustrating day. My, how emo of me, both this post and that, right down to lack of capital letters and the title quoted from the Cure.

(Above: One of the nifty graphics that designer Michael Austin did to illustrate some of the ways that SO2 is used in winemaking. Overall, I think the Chronicle did a terrific job with the layout–Nice work, guys!)

A bit of shameless self-promotion, but I have a feature in today’s Wine section of the San Francisco Chronicle. A long, lengthy discussion of sulfur dioxide and sulfites in wine in general. And as always, the comment trolls at the SFGate website are out in force. But whatever.

Feel free to hit the comments section here with any questions about the article/subject, or to start up a discussion.

(Go here to read the article)

Real Wine was ahead of its time when it was first published in the year 2000. And by choosing to focus on a broad movement within the wine industry to return to more traditional methods of winemaking and viticulture (all valid and relevant issues today), it remains an important read for any serious and intellectually curious wine lover.

Matthews is a vibrant and engaging writer, one who possesses both keen wit and sense of probing curiosity. Were he not so taken with the fringe elements of his subjects–biodynamic grape growers, artisan vignerons and Northern California pot farmers–he would likely wield the pen of investigative journalism in the vein of William Langewiesche or Seymour Hersh.

Real Wine is a look at what’s come to be called natural wine from grape growing and winemaking, to the marketing and selling of the stuff. It seeks to show the contrast between the artisan ways of the ‘Old World’ to the more technically driven methods of the ‘New’. But rather than look at these practices through a romantic haze, or by demonizing wine’s technocrats, Matthews sets his story firmly in late 90s California–a part of the world where each of these practices seems to co-ferment with the other.

The cast of characters–from Paul Draper at Ridge to Josh Jensen at Calera–is familiar to anyone who has followed artisan winemaking in California. But they tell a compelling story and Matthews’ account helps to put their contributions into a global context.

It’s interesting to note, of course, that with the passing of time since the book’s publication perhaps many of the people referenced here have lost their way, that the road to natural wine in California (and beyond) has become twisted and convoluted. Or have these passionate artisans simply become too successful at what they do? As Matthews himself points out in Real Wine’s incredible final chapter, the transition of artisan wine from a natural, almost humble product to an international commodity and status symbol is fraught with ambiguity:

“It has happened because Frank Schoonmaker, Bob Haas and the rest did their job all too well in communicating an enthusiasm for wines that are produced only in small quantities–the likes of Krug in Champage, Pétrus in Bordeaux, the Domaine de la Romanée-Conti in Burgundy. They then become the preserve of a few by virtue of their price. Just as oil money dislocated and transformed the Middle East, the grander wine regions have experienced the mixed blessings of being hit by a wall of money.”

Compelling stuff. And as you read Real Wine you get the sense that the only way out of this mess–for those who really want to experience natural wine–is to make it yourself in a garage. That would be the true garagiste revolution, sulfur additions, temperature control and all the rest be damned. And in fact, Matthews includes a handy appendix at the end to guide the reader to just that end.

Real Wine: The Rediscovery of Natural Winemaking, by Patrick Matthews. Click here to buy the book from Amazon. NB: I had to get my copy through Amazon’s reseller program. It’s another step but well worth it.

Ray Isle linked today to a rather odd little video produced by the people behind Mollydooker, a newish and apparently popular winery from Australia. I’ve not had the wines myself, so I can’t really comment on how they taste. The video, however, speaks well enough for itself:

Okay, so maybe they’ve got a problem with nitrogen during bottling (and why they’re broadcasting this to the world as a funky dance is beyond me), but after watching this video I can’t help but think of one of the biggest problems faced by wineries who use screwcaps: reduction. I’m no chemist and am oversimplifying here (please correct me if I’m wrong!), but to be reduced in the wine world means, essentially, to be a wine starved of oxygen. A wine in a reduced state smells funky, almost like vulcanized rubber or plastic, and one way to get it out of this state is to aerate it–to ‘shake it up’, as it were. I taste a lot of wine and one thing I’ve noticed is that reduction seems to occur most often in the relatively sweet, juicy and alcoholic style so favored by New World/international winemakers; and frequently these wines are sealed with a screwcap which seems to exacerbate the problem (screwcaps are very good at keeping oxygen out). That said, wine bottled with corks can also be reduced, and, in fact as a few winemakers in California have told me, the syrah grape itself might be inherently reductive. So, nitrogen?

For some reason I’ve got the Cars in my head now, so below for your viewing and listening pleasure is the classic, ‘Shake it Up’: